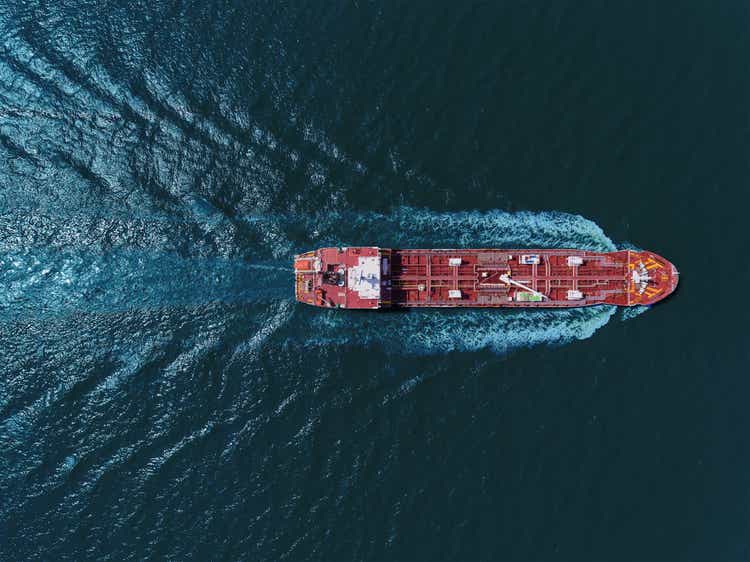 Teekay Tankers (NYSE: TNK) is one of the world’s largest operators of mid-sized tankers and is a listed company on the New York Stock Exchange. In this article, I will provide an overview of the company and I will explain my purchase thesis. If you are particularly interested in tanker companies, you can consult my previous article on International Seaways.

Based in Vancouver, Teekay Tankers was spun off from its parent company – Teekay Corporation – almost fifteen years ago in 2007. Over the years the company was able to grow from a fleet of 9 Aframaxes to the current fleet composed of the following elements 45 owned and leased vessels:

In addition, Teekay Tankers also holds a 50% stake in a VLCC tanker and in 4 additional chartered tankers (3 Aframax tankers and 1 LR2 product tanker). Most vessels are operated on the spot market, allowing Teekay Tankers to benefit from the current macroeconomic and oil environment. The average age of the fleet is 13 years old.

Teekay Tankers is 31% owned by the former parent company – Teekay Corporation – which through Class A and B shares still owns 55% of the voting rights.

Total operating expenses before impairment were $391m, or 26% higher than in the first half of 2021: the largest expense item is represented by travel expenses (bunker fuel and port expenses) which are amounted to $228 million and increased more than proportionally to revenues (+62% year-on-year). The other relevant cost item is vessel operating expenses which amounted to $78 million and was 9% lower in the first half of 2021 due to higher operational efficiency.

Looking at total operating expenses (i.e. after write-downs), H1-2022 showed a 2% reduction in costs due to the absence of write-downs which impacted H1 -2021 with an impairment of $85m for three Suezmaxes, one Aframax and three LR2s.

Moving on to the statement of cash flows, cash generated from operations was $1.8M as H1-2022 was impacted by an increase in operating assets which reduced cash generation. Cash flow from financing activities was negative at -$20 million with various initiatives carried out, including:

Cash flow from investing activities was positive at $31 million, mainly due to the divestiture of an Aframax vessel. Overall, the cash balance in H1-2022 is close to $72m while the net debt is $552m.

The pattern of crude oil trade changed abruptly after the Russian invasion of Ukraine, with crude oil exported from Russia to Europe declining by almost 700,000 barrels per day. This reduction is expected to become even greater when the EU ban on Russian crude comes into effect in December 2022. As expected, the 1.8 million barrels per day imported from Russia to the EU will need to come from elsewhere, with all possible locations being at much further distances from the EU (US, Africa, Middle East, Latin America). At the same time, Russian crude will likely be exported to other countries further afield than the EU, such as China and India. The direct implication of this disruption is that tanker operators, such as Teekay Tankers, will benefit from longer average travel distances needed to import oil into the EU and to export oil from Russia. In addition, the increase in average trip distance is expected to generate a 10% increase in tanker demand as delivery times will increase.

However, growth in tanker demand is not expected to be followed by growth in tanker supply. Indeed, tanker orders in the first half of 2022 were at a historic low with no new Suezmax and VLCC orders since June 2021 and recent new order delivery dates are towards the end of 2024 for Suezmax and Aframax while for VLCC first delivery dates are in 2025. In other words, there is a lag between the increase in demand and the availability of tankers to adjust supply. This scarcity of tankers is likely to drive up daily rates, as has already happened in recent months.

In this context, Teekay Tankers is well positioned to benefit from this medium-term demand/supply momentum: its fleet of 45 vessels operating on the spot market gives Teekay the flexibility to capture the highest rates by maximizing trip revenues and , hence, free cash flow. In addition, increasing the average trip distance will help reduce the average time spent at dock without generating revenue.

One of the main risks associated with Teekay Tankers (and its business) is the potential decline in demand for oil. Indeed, the decline in oil demand implies a reduction in tanker needs, the supply of which could exceed demand, leading to a subsequent drop in daily rates. Teekay Tankers is quite exposed to this risk as it operates its vessels in the spot market without long-term contracts which could instead help capitalize on the current high rate scenario. However, Teekay Tankers has demonstrated remarkable operational efficiency which should allow the company to navigate safely through a lower daily rate scenario: Assuming travel costs are variable, Teekay Tankers will be able to maintain a positive EBIT even in the event of a 15% decline. rate reduction.

According to Seeking Alpha’s Wall Street Ratings, six analysts have rated the company over the past 90 days: one analyst issued a “sell” recommendation while the other five analysts issued a “buy” or “strong buy” rating. The average target price is $32.13/share, which would represent a 15% upside from the current price and would also be the 52-week high.

Overall, Teekay Tankers is a profitable business with a strong balance sheet and good FCF generation. Its fleet of 45 vessels allows the company to benefit, as is already the case, from longer-haul movements of medium-sized goods. This trend should accelerate in December with the EU embargo on Russian crude. The current price of $27.84/share is a good entry point for investors with a medium-term investment horizon.

FacebookTwitterLinkedinMix
2022-10-11
Previous Post: After making a splash at the BET Awards weekend, Entre Luche is ready to step into the spot at his home in Iowa
Next Post: Latto Answers Kodak Black’s BET Awards Call With New Plaque