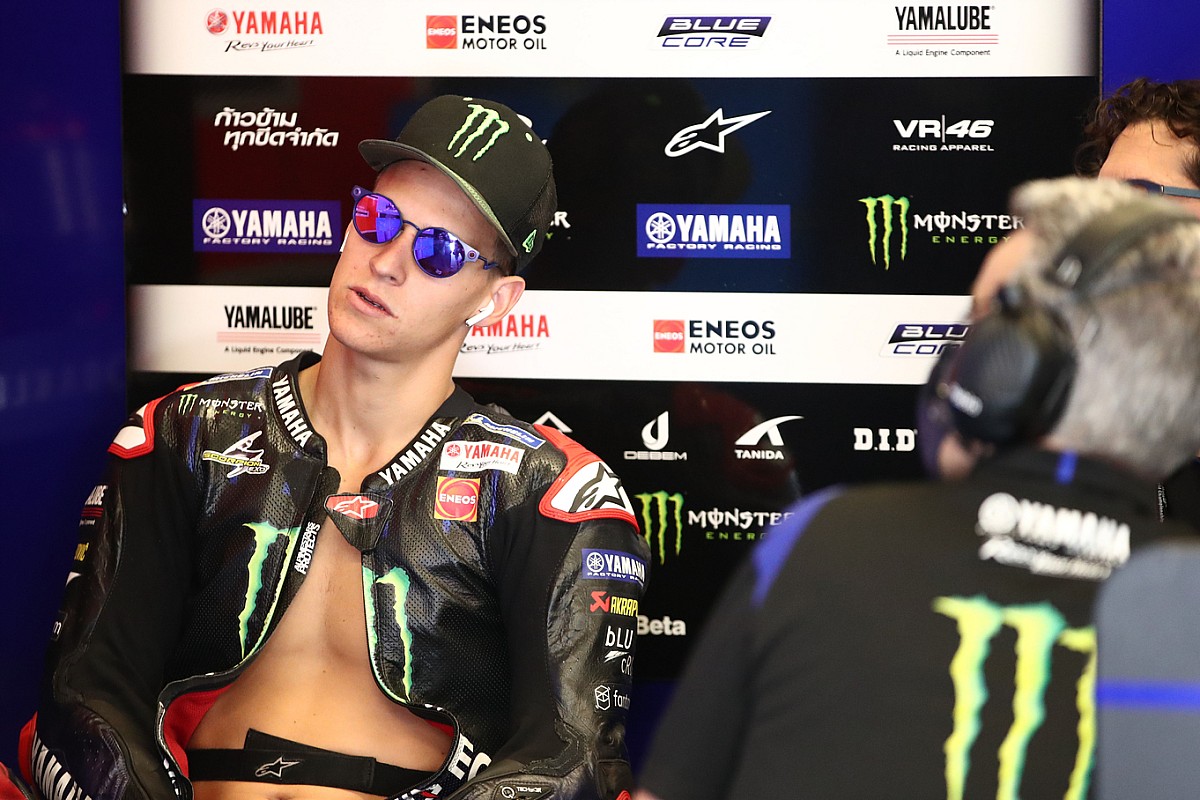 Quartararo had just taken fourth place at the start of the Q2 penalty shootout on Saturday and was on course to improve his lap when he slipped off his Yamaha on the left-hander of Turn 19.

He was able to return to his Yamaha box and get his second bike, with the reigning world champion qualifying from the back of the second row in sixth.

Quartararo says the crash was down to him pushing his limit, having a solid run around a circuit that didn’t suit Yamaha’s lack of top speed that depended on excellent qualifying.

“I just did my best,” he said after qualifying for COTA. “I knew if I wanted to have a great race tomorrow we had to make a gamble and I pushed 100 per cent and we had a crash.

“Then in the second run I tried to do my best too, it was better but in sector one I made a lot of mistakes. We could have improved on sectors three and four, but when it’s hot, we have a little more trouble with the grip and we have to push the limits.

“But I’m happy because I gave my best and I have nothing to say because a fall can happen.”

Photo by: Gold and Goose/Motorsport Images

Quartararo will start behind five Ducatis in the 20-lap round four of the 2022 MotoGP season on Sunday, with the Italian marque the first since Honda at Motegi in 2003 to annex to the top five on the grid.

Despite the big power disparity between the Yamaha and the Ducati, Quartararo admitted he’d rather start behind as many Desmosedici as in front of them and doesn’t see racing as an exercise in damage control at the moment.

“To be honest, I don’t think so because they’re already in front,” he said when asked by Motorsport.com if the current grid order was Yamaha’s nightmare scenario. “So I’d rather have five Ducatis [in front] than a Suzuki, a Honda.

“We have five Ducatis in front. In the end, it doesn’t matter if it’s Suzuki, Honda or Ducati because all the bikes go very fast.”

“Let’s see how it goes but I think we have to give our maximum from the start. I will not say [I’m expecting] damage limitation, but there are a lot of people with a good rhythm.

“Luckily the Aprilias stayed in Q1 because the pace they had was really strong. For me the favorite is Marc [Marquez] and [Enea] Bastianini.

“They have a very strong pace and just before coming [to the debrief] we were watching sector three of Bastianini with old tires [from FP4]. Basically, that was my time attack sector three. So we will have a lot of trouble in the backstretch, that’s for sure.”