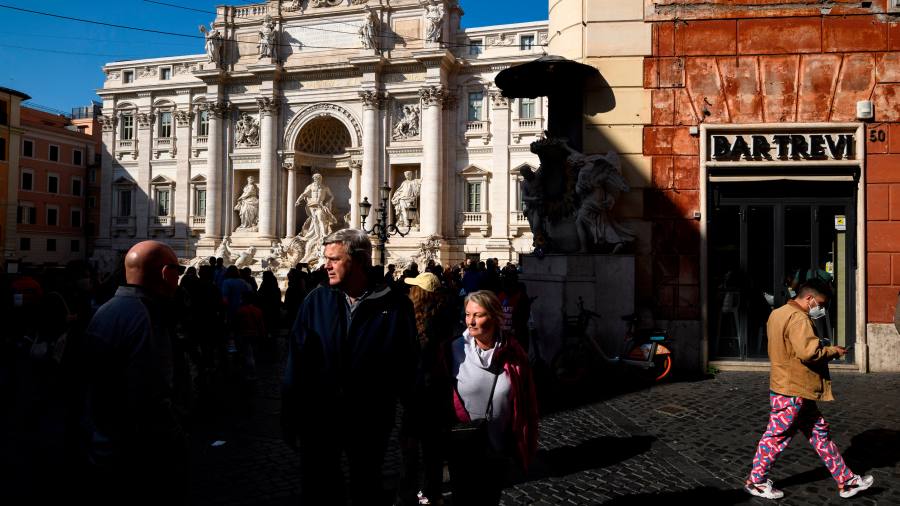 Hedge funds lined up the biggest bet against Italian government bonds since the global financial crisis on growing concerns over political unrest in Rome and the country’s dependence on Russian gas imports.

The total value of Italian bonds borrowed by investors to bet on lower prices this month reached its highest level since January 2008, at more than 39 billion euros, according to data from S&P Global Market Intelligence.

Investors’ rush to bet against Italy comes as the country faces growing economic headwinds from soaring natural gas prices in Europe driven by supply cuts from Russia and a difficult political climate with imminent elections in September.

“It is the most exposed [country] in terms of what happens to gas prices, and politics is tough,” said Mark Dowding, chief investment officer at BlueBay Asset Management, which manages about $106 billion in assets. It sells short Italian 10-year bonds using derivatives called futures.

The IMF warned last month that a Russian gas embargo would cause an economic contraction of more than 5% in Italy and three other countries unless other nations share their own supplies.

Italy is also seen by investors as one of the countries most vulnerable to the European Central Bank’s decision to roll back its stimulus programs by raising interest rates and halting bond purchases that have supported the country’s vast debt market.

A period of relative political calm ushered in by the appointment of Mario Draghi as prime minister in February 2021 was shattered in July this year when the former head of the ECB resigned and his national unity coalition administration s collapsed.

Snap elections are now set for September, with nationalist leader Giorgia Meloni seen as the favorite to become the next prime minister. On Wednesday, Draghi called on parties contesting the elections to respect Italy’s commitments to financial reform.

Eurosceptic parties within the right-wing coalition, which polls suggest could get up to half the vote on September 25, have signaled they may revise details of Italy’s 200 billion-euro stimulus package funded by the EU and other reforms such as a new competition law associated with it.

Italian bonds have already sold off in recent weeks as investors react to growing uncertainty. The yield on Italy’s 10-year debt rose to 3.7%, widening the spread, or “spread”, with German debt – a key barometer of risk – to 2.3 percentage points from 1.37 percentage point at the start of the year.

A top hedge fund investor said ‘Italy appears to be the most vulnerable country’ to deteriorating economic conditions, adding that such bets were now ‘widespread’ with many managers playing the spread between bonds German and Italian.

Michael Hintze, founder of hedge fund CQS, was among those who profited from bets against Italian bonds earlier this year, according to documents seen by the Financial Times. CQS declined to comment.

Betting against Italian debt was previously a very lucrative trade for hedge funds due to long-running political uncertainty and fears over the country’s 2.3 billion euros of government bonds outstanding.

In 2018, as markets worried about whether a coalition government would raise debt levels and loosen ties with the EU, hedge funds raised their bets to the highest level since the financial crisis, with the Brevan Howard co-founder Alan Howard among those profiting. However, hedge fund betting, both in absolute terms and as a proportion of total bond issuance, has now risen above 2018 levels, a sign that investors think yields could go from here.

Some managers remain wary of the deal, saying the ECB’s recently announced transmission protection instrument will limit the rise in yields. The new tool was designed to prevent borrowing costs in highly indebted eurozone countries from rising too high above core countries like Germany.

“It seems to me [it’s] like playing chicken with the ECB,” said Decio Nascimento, chief investment officer at hedge fund Norbury Partners, which is avoiding the transaction.

However, BlueBay’s Dowding argues that the TPI is little deterrent to placing a bearish bet.

“[The ECB] cannot just buy Italy,” he said, adding that such a move would act as a signal that the central bank would provide support to countries that lack fiscal discipline.

FacebookTwitterLinkedinMix
2022-08-25
Previous Post: A Bristol Bay manager has staked his hair on the success of his elders. They all graduated.
Next Post: Everything you need to know about the $200 NFL Free Bet Offer