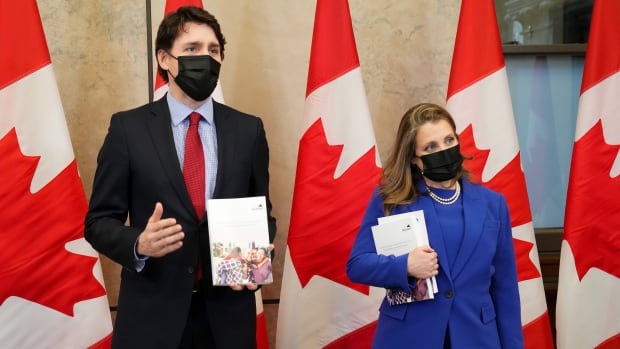 Presenting her second budget in the House of Commons on Thursday, Finance Minister Chrystia Freeland said “Now is the time for us to focus – with smart investments and a clear focus – on growing our economy and on the need to make life more affordable for Canadians. “

Almost everyone in Ottawa would agree with these general objectives. As always, the real debate is how to do it.

As Freeland spoke, Acting Conservative Leader Candice Bergen was at a microphone in the House foyer, telling reporters that her MPs would not support “runaway spending” from an “irresponsible… typical spending budget and NDP taxes. “

Not to be outdone, Pierre Poilievre, the presumptive frontrunner in the Tory leadership race, tweeted that the “socialist coalition budget” would “turbocharge” inflation.

The effect of the NPD should not be overestimated. Despite all the hype, the NDP’s contributions to this budget are relatively modest, at least fiscally.

The NDP’s biggest demand — for the expansion of subsidized dental care — adds $5.3 billion to the budget over the next five years. A one-time increase to the Canada Housing Benefit – a proposal that emerged from negotiations between the Liberals and New Democrats on the supply and confidence agreement that would avoid an election until 2025 – will cost $475 million this year.

Apart from these elements—which will be very important for the Canadians who will benefit from them—this is a budget that a Liberal majority government would have tabled, with a few orange post-its affixed to it. The deficit is expected to decline steadily to $8.4 billion in 2027, which would be the smallest deficit these Liberals have recorded.

But there’s still debate to be had over how Ottawa should help build a growing economy — especially now that the federal government has adopted — or at least borrowed — a new name for its own approach.

“Our strategy is what Janet Yellen, the US Treasury Secretary, recently dubbed ‘the modern supply-side economy,'” Freeland said Thursday.

Freeland argued in the budget that what Yellen described in a speech in January is more or less what the Liberals have been trying to do for six and a half years. But Yellen may have explained it in a simpler and more succinct way than any liberal has managed to date.

As Yellen put it, “traditional” supply-side economics – the name given to the political agendas of conservative figures like former US President Ronald Reagan and former British Prime Minister Margaret Thatcher – “seeks to increase the potential output of the economy…through aggressive deregulation coupled with tax cuts designed to encourage private capital investment.”

“The modern supply-side economy, by contrast,” she continued, “prioritizes the supply of labor, human capital, public infrastructure, [research and development] and investments in a sustainable environment,” the Treasury Secretary said. “The modern supply-side economy seeks to stimulate economic growth by boosting the supply of labor and increasing productivity, while reducing inequality and environmental damage.

Another approach to growth

Two and a half months later, Freeland tabled a budget that devotes significant amounts of new money to housing, infrastructure, innovation and clean growth, while touching on things like immigration and training. .

But the real dispute seems to be over how this government has chosen to promote growth – with those critics wishing the government was more interested in lower taxes, less regulation and balanced budgets.

Reverse a two-decade trend in budgeting

Freeland made a point of emphasizing in his remarks his commitment to fiscal discipline. She cited the “fiscal anchor” of a falling debt-to-GDP ratio. The budget promises two separate reviews to find $3.8 billion in planned annual spending cuts. And there are tax credits for investments in critical minerals and carbon capture and storage.

But it’s also a budget that promises to establish a Canada Growth Fund to support low-carbon industries and a Canada Innovation and Investment Agency to help commercialize research.

In this sense, invoking “modern supply-side economics” could be interpreted as an attempt – by a Liberal government that has never got on particularly well with Bay Street – to broaden the conversation about what counts as a focus on economic growth.

The Liberals reversed a two-decade trend of declining federal revenues and spending. Federal program spending was 12.5% ​​of GDP in the last full year of Stephen Harper’s Conservative government and Freeland projects it will be 14.7% in 2026-27. Federal revenues represented 14.0% of GDP in 2014-2015 and are now expected to reach 15.7%.

These are not trivial changes. If it once seemed risky to propose new taxes or expenses, these changes might seem somewhat remarkable.

Still, there remains a significant risk to Freeland’s modern supply-side economy. On the one hand, federal spending still needs to be spent Good – and the more you spend, the more vulnerable you are to accusations of wasteful spending. On the other hand, the economy must continue to grow.

The Minister of Finance has not yet budgeted all the expenditures the federal government might need or want to make. A possible increase in the Canada Health Transfer and perhaps a future increase in funding to bring military spending closer to NATO’s 2% of GDP target have not been added to the books.

Freeland suggested on Thursday that the government’s actions will ultimately help fight inflation, but she offered no quick fix. In all honesty, there may not be a quick fix. And the idea that federal spending causes inflation might be too simplistic.

But the longer high inflation and soaring house prices persist, the grumpier voters will be. It was inflation that helped usher in the supply-side economy of Reagan and Thatcher, after all. And Poilievre waits in the wings, who is full of contempt for the federal government’s spending habits and calls for tax cuts and the removal of government “gatekeepers” so Canadians can prosper.

The modern supply-side economy is not socialism. But its merits – and the follow-up of the Liberal government – ​​have yet to be tested.

FacebookTwitterLinkedinMix
2022-04-08
Previous Post: The FanDuel promo code offers a risk-free first bet of $1000
Next Post: How to watch, stream and bet Friday Night Baseball on Apple TV Plus