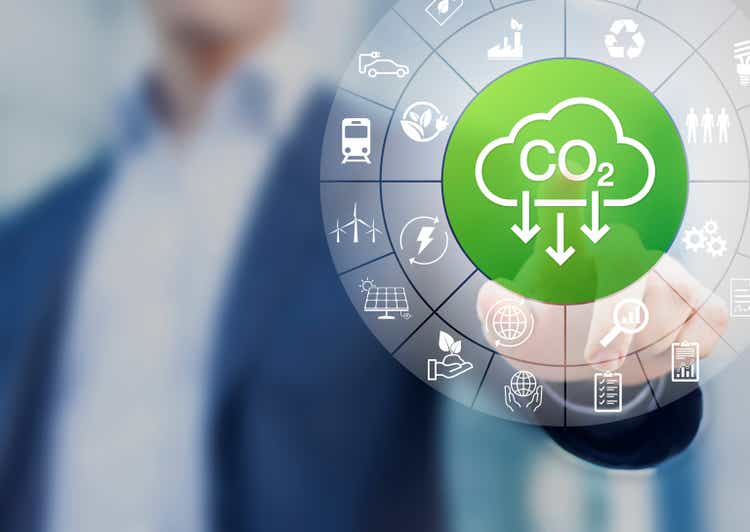 ETF SMOG: a well-diversified bet on the energy transition

The VanEck Vectors Low Carbon Energy ETF (NYSEARCA:SMOG) (the “Fund”) seeks to replicate as closely as possible, before fees and expenses, the price and yield performance of the MVIS Global Low Carbon Energy Index (MVSMOGTR) (the “Index”).

The Index is a rules-based index intended to track the overall performance of renewable energy companies which may include, but is not limited to: wind, solar, hydro, hydrogen, biofuels or geothermal technology, lithium-ion batteries, electric vehicles and related equipment, waste-to-energy generation, smart grid technologies, or construction or industrial materials that reduce carbon emissions or energy consumption », according the VanEck website.

Investors cannot buy an index directly. The Fund has been created to provide a financial product in which investors can participate in the returns of the Index.

Support for transition to low-carbon (“clean”) energy builds on Paris Agreement, Biden administration and long-term projections from US Energy Information Administration (“EIA”) , a report by BNP Paribas Asset Management and a forecast by Larry Fink, CEO of BlackRock (BLK).

The Paris Agreement was adopted by 196 Parties in Paris in December 2015 and concluded in November 2016.

The Paris Agreement is a legally binding international treaty on climate change. Its goal is to limit global warming to well below 2, preferably 1.5 degrees Celsius, above pre-industrial levels. To achieve this long-term temperature goal, countries aim to reach the global peak in greenhouse gas emissions as soon as possible to achieve a climate-neutral world by mid-century. »

In a White House”Fact sheet“As of April 22, 2021, the Biden administration announced a new goal of achieving a 50% reduction in greenhouse gas pollution by 2030 and net zero greenhouse gas emissions by 2050. The following six sub-targets or strategies have been set to support the achievement of these targets:

In his 2022 Annual Energy Outlook, the EIA made the following projections:

BNP Paribas Asset Management has drafted a report in 2019, which included the following findings:

Finally, in a letter to CEOs, BlackRock CEO Larry Fink wrote, “Climate risk is investment risk.” He also observed: “In the near future – and sooner than expected – there will be a significant reallocation of capital.”

The MVIS® Global Low Carbon Energy Index (MVSMOG) tracks the performance of the largest and most liquid companies in the global low carbon energy sector. It is a modified index weighted by market capitalization and only includes companies that generate at least 50% of their revenues from renewable energy sources, the development of related technologies or products. sustainable constructions that reduce energy consumption. MVSMOG covers at least 95% of the investable universe,” according to MarketVector.

The index is international in scope and is diversified across a number of sectors. The United States is the most weighted country and utilities are the most important. Detailed weights are specified below.

The index constituents are evenly split between large, mid and small capitalization companies as shown below.

The 10 largest holdings in the index are:

SMOG charges an expense ratio of 0.55% and has approximately $244 million in assets under management (“AUM”).

Looking for Alpha gave SMOG a “C-” rating for its expense ratio,

Over the past 10 years, SMOG has returned 322.38%. This return exceeded the return of the S&P 500 (SP500TR) by 230.27% over the same period. The most significant outperformance came in anticipation of a fundamental shift in US policies around the 2020 US presidential election.

Over the past year, SMOG has lost 22.57% of its value when SP500TR has lost 12.22%. The companies in the index were affected by the decline in the stock markets.

The SMOG thesis is strongly supported by the global transition to low-carbon energy production. However, this is a long-term trend that is subject to short-term equity market risks.

The index is well diversified and includes companies at almost all stages of technological development. The index is also not a bet on a particular solution, but rather a bet on the whole spectrum. It would not be easy for individual investors to build a portfolio like SMOG’s.

For long-term investors, the Fund should outperform the broader equity market, and its thesis is fundamentally sound. For these reasons, I believe this is a long-term “Hold”.

FacebookTwitterLinkedinMix
2022-09-08
Previous Post: $1000 risk-free bet for Thursday night football with ROTOBONUS
Next Post: How to Bet on Thursday Night’s Slate, Featuring Twins vs. Yankees and White Sox vs. Athletics